Rolling strip steel is a challenging undertaking. The slightest error in the transversal rolling force may well make the strip run off course or become wavy. For this reason, ABB has developed a flatness meter called Stressometer which is installed in the rolling mill and measures the tensile stress in the strip so it can be rolled straight and flat.

ABB’s department for force measuring products has been selling its Stressometer to rolling mill makers throughout the world for many years. Perfectly flat steel strip is required for many subsequent finishing operations, such as in moulding. Wavy sheet metal results in increased scrapping and in higher costs to customers.

A TEST SYSTEM FOR GLOBAL BENEFIT
Nothing works forever and sometimes, Stressometers must be handed in for repair. Previously, they were sent to Sweden for that purpose but now ABB is establishing local service centers throughout the world. For this purpose, they need a test rig in which they will be able to test important components, for example, the slip-ring device which transmits measurement data from the pressductor transducers embedded in the measuring roll of the meter to the equipment on the mill floor that then controls the rolling force of the mill. Prevas contributes to this outcome.

Hans Ling is the Product Manager at ABB for the mechanical aspects of the Stressometer, including the slip-ring device. He is also the Project Manager for the test equipment which Prevas has been commissioned to develop.

– Since a while back, ABB has been using another test equipment which was also developed by Prevas, but unfortunately, the requirements specification for it wasn’t demanding enough, resulting in that equipment could not complete its task. For this reason, Prevas was once again called in, this time to take on the job of a turn-key supplier of a complete test system. By way of a corrected requirements specification, Prevas was commissioned to build a new and better rig for the testing of slip rings, a device that can be produced and used by service technicians worldwide. Acceptance tests will be conducted in April 2014. Deliveries of additional rigs are scheduled to commence shortly thereafter.

PREVAS IN THE DRIVER SEAT
In the Signal Transmission Unit Test Equipment project, Prevas made use of some ABB components such as a drive motor and motor control equipment. Beyond that, the resulting rig is typical of the kind of components Prevas usually puts into its solutions: electronics, mechanics, electric power, software and measurement data transmission. In addition to the equipment which formed part of the previous solution, further control cabinets have been added. Unlike last time, when ABB supplied the drive motor and its control equipment, this time Prevas was asked to select and supply that equipment.

WIRELESS COMMUNICATIONS
Prevas built a calibration module which is able to measure the quality of data transmission through the slip-ring device. It consists of a measurements acquisition unit from National Instruments, an electrical equipment cabinet containing everything and a printed circuit board which is fitted into the rotating measuring roll of the equipment. But this is not any run-of-the-mill circuit board but a circular one, fitted inside the measuring roll of the Stressometer and rotating with it at 4000 rpm. The board gets its power from the slip-ring device through an ingenious transformer arrangement where control signals enter by Bluetooth and the output signals leave through the slip contacts, where they are then forwarded to the measuring equipment and from there to a PC where they are analyzed in LabView. The PC also controls the motor parameters by way of ABB’s drive control unit.

– Judging by what we have seen so far of the project, like the software and its updates, we think that Prevas and its subcontractors have put the whole thing together quite nicely. We have been in constant contact and have shared our information and the project has chugged along well. It is an advantage that the Prevas consultant, currently serving as Project Manager, previously consulted at ABB, concludes Hans Ling. 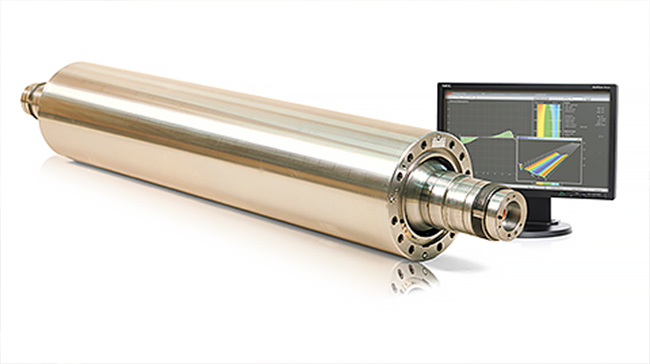