Maxim wanted to increase understanding of how automation components are used in practice. This is why they contacted Prevas.

The assignment was to train their technicians around the world. Courses were held in Nice, Shanghai and San Jose, as well as Västerås for sales staff, and covered information about sensors, actuators and naturally PLC systems. Also included was hands-on programming of actual systems.

How do you stand out at a trade fair with 76,000 visitors in southern Germany when the ambition is to illustrate the significance of Industry 4.0? Answer: You let Prevas build a production cell together with Maxim Integrated, a company with 9,000 employees, all who are experts in integrated circuits. You use the latest technology with components that are at the absolute leading edge of automation along with a product from the cell that no one can resist – a beer stein.

Using sensors that communicate with large volumes of data content with incredible precision and that can detect various shades of colors, weighing cells and temperatures with extreme accuracy, and then putting it all together into an integrated cell, controlled and maneuvered from an iPad is modern to the extreme. To then communicate with an industrial printer with free text has not been seen in the market either. We demonstrated this for the first time in November of 2014 at Electronica in Munich.

The trade fair attracted 76,000 visitors and we had the most frequented demo of the entire fair with long lines from morning to evening. At most, people were waiting in line for an hour and twenty minutes for a stein.

What drew such interest was that visitors could use an iPad to choose a color that matched their favorite kinds of beer. You could then type in anything you liked, such as your name, and start the order. The job was sent from the iPad in image format to the receiving server PC, where it was converted into a format the printer could handle. Thereafter the image was sent to the printer which then verified that the right image had been received. Once the color sensor found the right stein, the palette was fixed and the robot retrieved the stein. The stein's handle was then oriented so that the text would be correctly positioned and a check was also made that the weight was right and that there were no defects. Next the robot rotated the object in front of the ink jet printer and the custom text was applied. After a brief drying period in front of strong lamps and an extra check of the weight, the stein was ready to use.

The incredible success of the demo has resulted in Maxim continuing to travel the world with its modern production cell. 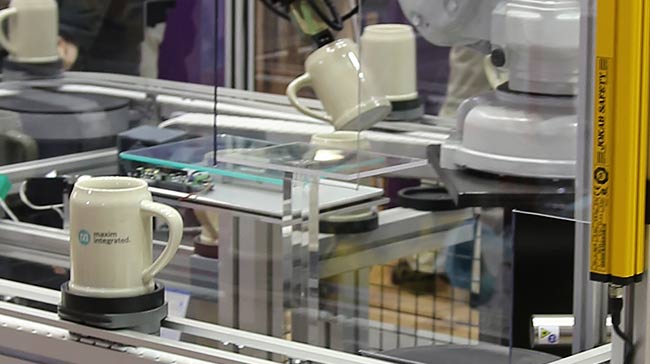 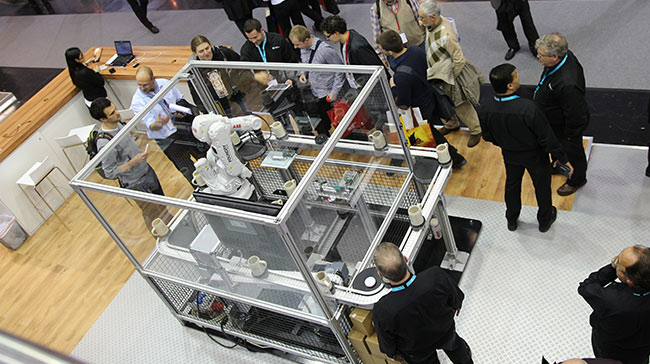 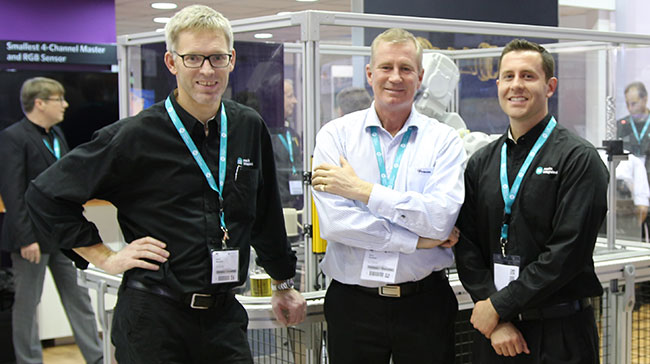