Kontigo Care and Prevas have been collaborative partners for several years, with Prevas developing the hardware solutions that Kontigo Care needs to fulfill its visions for improved dependency treatment. With the new eHealth platform Previct, they hope to be able to foresee relapses before they occur.

KONTIGO CARE PRODUCES MOBILE EHEALTH TOOLS that strengthen and facilitate treatment of alcoholism and gambling addiction. Prevas has been involved since the company’s startup phase and has helped in developing the eHealth platform Previct, which includes Previct Alcohol (TripleA) and Previct Gambling (TripleG).

“Because we were involved at such an early stage, we’ve had many discussions with Kontigo Care about the product,” says Marcus Berglund, Project Manager at Prevas.

“One of the co-founders of Kontigo Care, Daniel Benitez, is a true visionary and a driven entrepreneur in all regards.”

Previct Alcohol (TripleA) consists of an alcohol monitoring device in pocket format, smartphone apps and a cloud-based care portal, but even from the start, there were already bigger visions that they are now moving forward with. The name Previct is associated with two keys for successful dependency treatment, namely prediction and prevention, which is enabled through the use of advanced data processing and artificial intelligence (AI) .

“Previct provides entirely new capabilities for early identification of addiction relapses and in the best event, stops them long before they occur,” says Maria Winkvist, Product Manager at Kontigo Care. “Relapses are one of the greatest challenges for today’s dependency care and cause considerable suffering for individuals and their families, as well as entailing major costs for society. Another challenge in treatment is attaining continuity and daily motivation, but with today’s technology, there are entirely new opportunities for remotely motivating and engaging patients.”

According to Marcus, the more visionary ideas came up early, long before the first prototype of TripleA was completed. For Prevas, it was more a matter of dampening Marcus’ enthusiasm a notch to first focus on developing a product that could do the basic job, and once this was done, putting in the time and effort necessary for developing more sophisticated prediction. This kind of focus resulted in a product launch after just 18 months of development. But it was clear that Kontigo Care was intent on further developing the product for predictive methods.

“As an example, they brought in people with many years of experience from data processing and statistics, who worked alongside product development,” says Marcus. “At the same time, it was of the utmost importance to get the product out on the market so as to be able to collect data and build up experience from how it was being used and worked in the field, as well as to initiate clinical studies.”

In just two years, TripleA has become established in nearly 60 Swedish municipalities and is used daily in addiction and dependency care. Despite a target group that isn’t accustomed to technology, implementation of Previct is going quickly and smoothly, and the new capabilities have resulted in several reports that support the fact that the solution is producing entirely new conditions for treatment.

“That implementation is progressing so smoothly and that the system appeals to both care providers and care recipients is closely related to the time invested in developing the product in collaboration with healthcare professionals,” Maria continues.

“Care providers are the best at care and we know how to develop products. Through good collaboration, we are building an eHealth platform based on the care providers’ and recipients’ day-to-day activities but with everything the latest technology has to offer, producing an effect a little like 1+1=4.”

According to Maria, Prevas has played an important part in designing and helping them to create a smart, IoT-equipped alcohol monitoring device that is adapted to treatment. It is important however, to understand that it is not just taking an alcohol monitoring device and connecting it to an app to create the eHealth platform that Previct has become. Prevas’ work with enabling technologies – or in other words, an integrated system for collecting measurement data – has been essential in developing the predictive methods that constitute the new platform. Marcus emphasizes that this has always been a primary goal and that this is where Kontigo Care can really make a difference.

“It means a lot to me that Kontigo Care can actually use collected data to prevent relapses,” says Marcus. “This is one of the original incentives for our work. Kontigo Care has gathered a multitude of experience, actively worked with the care sector and taken advantage of their knowledge. This information has then been refined to create a useful tool for the new digital
healthcare.”

With Previct, care providers gain unique knowledge of each individual, and they can subsequently base their actions on how care recipients actually feel – and not based on a normal distribution. Care providers can see deviations from the pattern in real-time, they have contact via the app and cloud solution, and they can immediately take action. There are many aspects to weigh into the assessment, such as increased trust, the care recipient no longer needing to be questioned, and that the solution is discrete and location-independent.

Another aspect is “co-creator”, which is something of a buzz word in healthcare. It is however, one of the most important factors for sustainable care – that care recipients feel that care is shaped based on their own conditions and that they can participate in shaping it. All this entails a disruptive development in addiction and dependency care; it’s going to turn everything upside down. It also means new opportunities for research. How does the “yearning” look for different patient groups with dependency problems and psychological comorbidity, such as a bipolar person compared to a person with depression? Which treatment methods best correspond to the needs of the different groups when yearnings arise and which connections are there to other factors, such as sleep or stress, for example?

“Myself, I’m very enthused about the value of a sober day, a concept that was coined and appraised in an independent health-economic evaluation of TripleA,” says Maria. “The value of a sober day can be that someone does not die in traffic, a saved relationship or perhaps a sober Christmas for a family.”

By taking the cost for TripleA per unit and per month, and dividing it by the number of verified sober days in the evaluation, the cost for each sober day has been calculated at just over $17. If saved lives and relationships were included in the calculation, the cost would be significantly lower.

Even if Daniel Benitez laid the foundation for Kontigo Care with his background as a sober alcoholic, there are many other things that are worth taking up. About 400,000 children in Sweden presently live with one or two parents with dependency problems, children living under entirely different conditions than others. It might be that Dad is the best in the world when sober, but does Mom dare to leave the children with him? The new opportunities that Previct provides help entire families; another relationship can be created, trust increases.

“eHealth, artificial intelligence, embedded systems – all are very high tech,” says Maria in closing. “Something that’s really good about it is the interaction with completely different segments of society, with people who may not even be especially interested in technology – interaction that makes their everyday lives so much easier. The bottom line is that Prevas and our entire team have contributed to many people having a sober day and to making day-to-day life better for many children.” 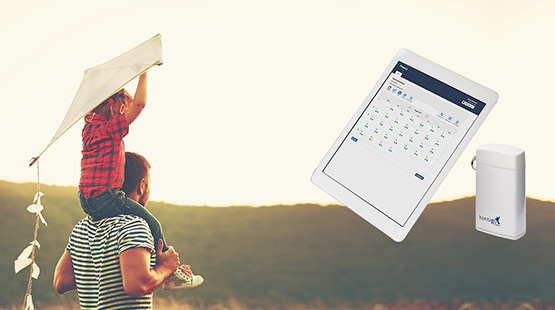