It sounds almost too good to be true that safe drinking water can be produced by placing a blue plastic bag filled with four liters of contaminated water in the sun for four hours. But it’s a fact: The idea has been fully tested and put into production through a collaboration between 4Life Solutions and Prevas. A user-friendly, inexpensive, and environmentally sound variant will soon be ready for use in the world’s poorest countries.

Imagine being able to provide clean drinking water for the 2.2 billion people in the world that need it! This is what Alexander Løcke was thinking as he was preparing for his final exam at Designskolen Aalborg in Denmark. So, he threw himself into inventing a method that could easily and simply purify contaminated drinking water for people in the world’s poorest countries.

The project was a success. SolarSack, as the product was called, was able to convert contaminated, bacteria-laden water into safe drinking water in the space of a few hours. And to top it all off, solely by using a plastic bag and the sun’s rays. The product itself resembled a blue plastic bag with an opening for pouring the water into and a small tap for draining the water.

Alexander Løcke lived in Uganda for several periods during the development of the product. Living for longer periods with people who need safe drinking water and getting to know their daily routines provides a deeper understanding of what it entails for them to take the product on board and actually use it.

The technique used to purify water is known as SODIS, which stands for Solar Disinfection. The contaminated water often contains several strains of E. coli bacteria and is purified by pouring into the clear plastic bag and leaving in the sun for about four hours.

SolarSack works best when the water is fairly transparent and sunshine and heat are present. It is therefore particularly suitable for use in hot climates. The process takes slightly longer when the weather is overcast.

It is difficult for users to determine when the water is clean. Consequently, 4Life Solutions is in the process of developing a UV indicator, which will display a smiley when the water is safe to drink. 99.99% of all bacteria and viruses will have been removed from the water by means of UV radiation when the process is complete. The bag is blue on one side in order to preserve the heat of the sun’s rays. This helps the process go a little faster. A SolarSack lasts for up to one year and can produce 2000 liters of safe drinking water.

“It was necessary for the product to be so simple that even children could use it. But there was just one problem with the first version of the indicator: It was too expensive,” explains Poul Bundgaard, COO at 4Life Solutions, the company founded by Alexander Løcke.

As a result, 4Life Solutions contacted Prevas to help them bring down the cost of the indicator. The first version of the indicator actually doubled the price of the SolarSack. And although the bag could be re-used up to 500 times, it was too expensive to serve as a serious alternative in the poorer areas.

“It was an exciting challenge for us,” says Henrik Møller, Director of Prevas in Denmark.

Prevas has extensive experience in designing and developing electronics, software, and mechanics for equipment in the energy, food, and life science industries. This applies to products that are “invented from scratch” or product maturation based on prototyping or “proof of concept.”

“SolarSack came up with a prototype, which was good, but reducing the price to less than one dollar per unit was a nigh impossible task,” explains Henrik Møller.

Despite this, Prevas still succeeded in redesigning the product and using alternative components in the form of LEDs that were both reliable and cheap enough to be cast into the water containers instead of solar cells. The newly developed product has now been put into production at a Danish company in Switzerland. It is expected to be ready for distribution in 2021.

“We have never been involved in developing anything similar to this before, and it has been both a meaningful and exciting challenge,” says Henrik Møller.

The people at 4Life Solutions are extremely pleased with the help provided by Prevas.

“It is extremely important that SolarSack is inexpensive, easy to use and safe. If users do not feel they can rely on the water treated in a SolarSack to be safe, they naturally fall back into old patterns where they, for example, cut down trees to provide firewood for boiling their drinking water,” explains Poul Bundgaard.

This is not only hard work but also harms the environment and produces an unnecessarily large amount of CO2 emissions. 4Life Solutions has therefore also ensured that SolarSack is refundable and can be re-used, which means that no new forms of pollution will be created in user countries. One of the recycling options is to build houses using the compressed plastic waste from the product.

“This has actually proven to be both strong and good building material,” adds Poul Bundgaard.

4Life Solutions has high expectations regarding the rollout of the new SolarSack, which it calls a SaWa. In this case it stands for Safe Water, but SaWa also means OK in Swahili.

“Safe drinking water can significantly reduce the occurrence of a wide range of diseases such as cholera and typhoid. 500,000 people die each year as a result of having no clean drinking water. We would like to help minimize that number,” concludes Poul Bundgaard.

A SaWa resembles an ordinary blue plastic bag at first sight. But in the space of four hours, it is able to convert biologically contaminated water into clean drinking water solely by means of the sun’s rays.

It is important that users can easily read when the water in a SaWa is clean enough to drink. 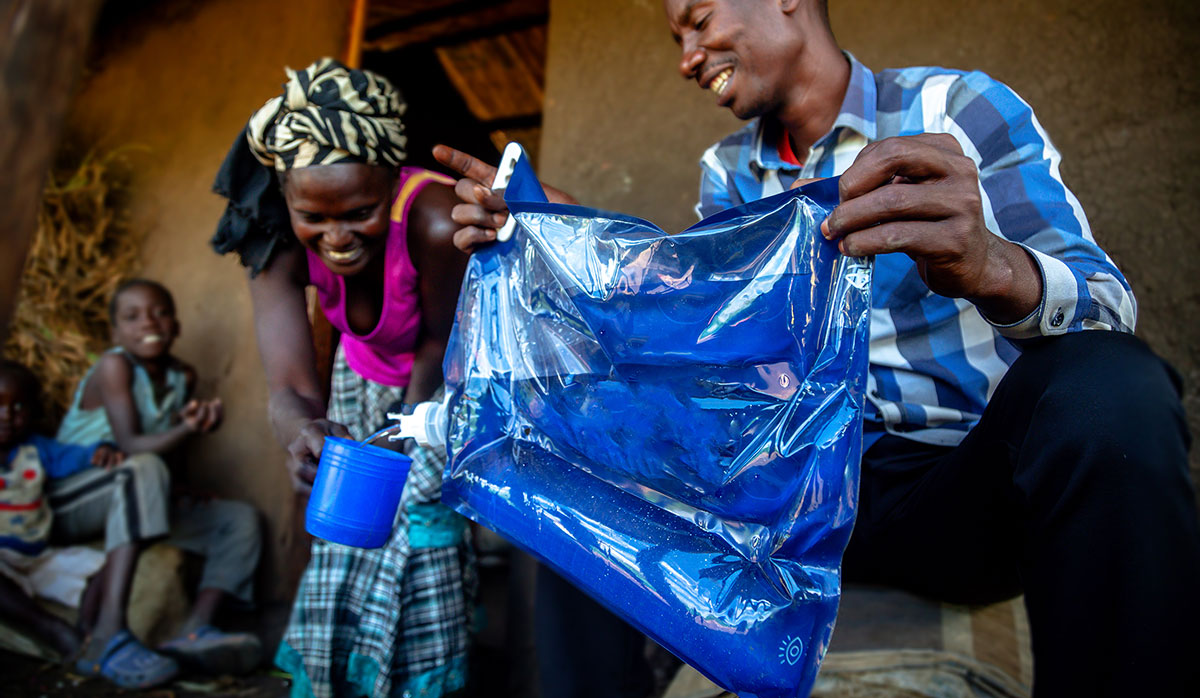 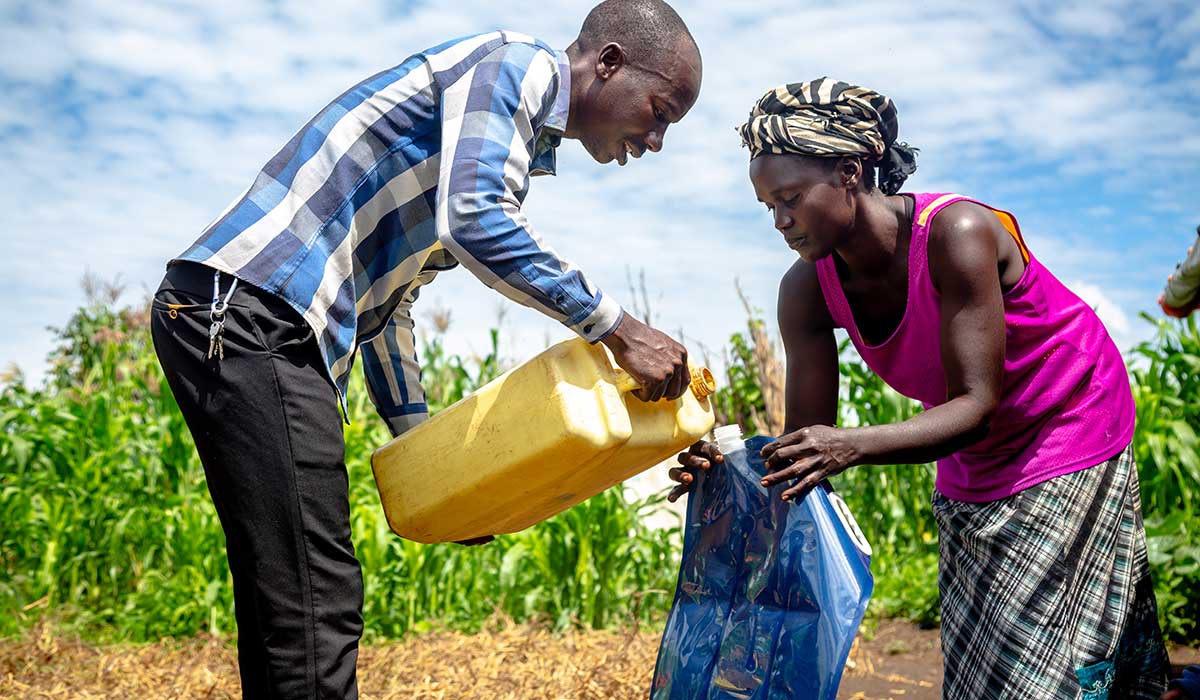 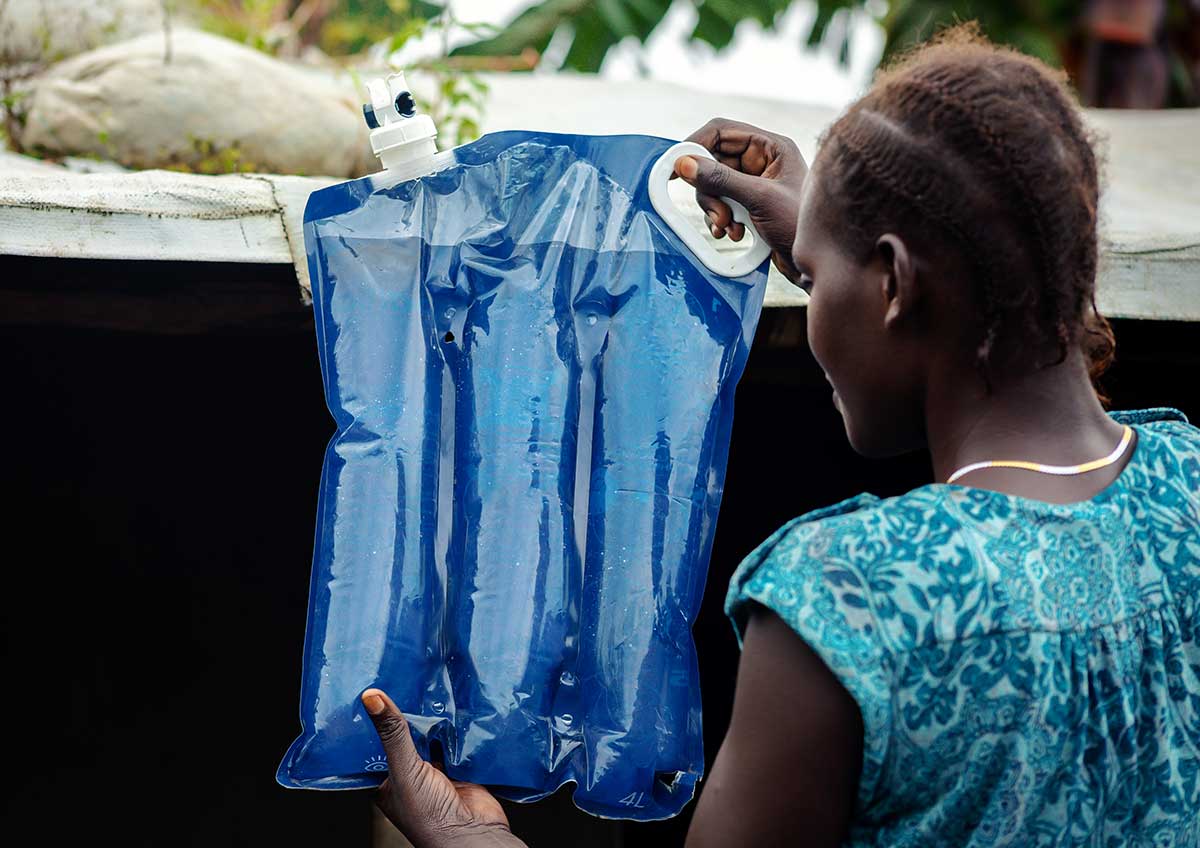 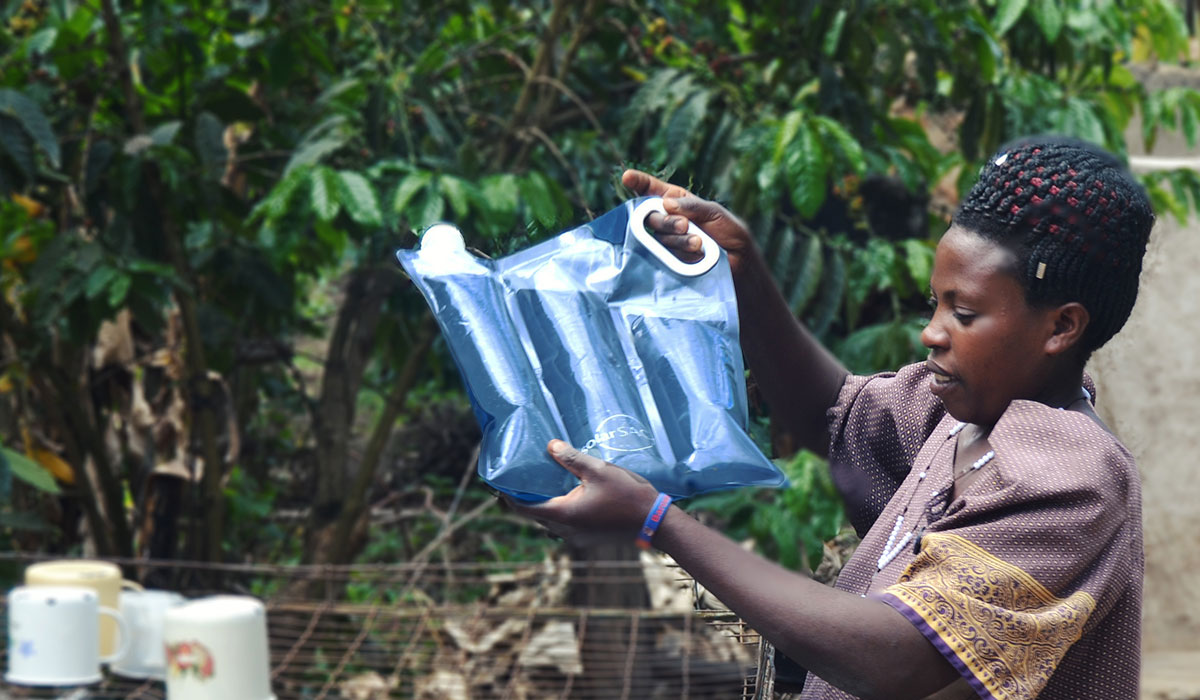