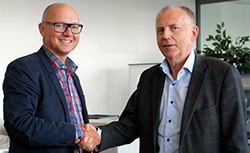 Prevas has made a breakthrough into the Swedish paper industry by supplying the Infor EAM maintenance system to SwedPaper. Internationally, Infor EAM is a large maintenance system that is used in several different industries. Feedback from the customer has been top-notch as a result of Prevas' quick and quality-assured delivery.

SwedPaper AB is a new company that acquired the PM2 paper machine at the Korsnäs mill in Gävle from BillerudKorsnäs AB. When Billerud and Korsnäs merged, the EU Commission stipulated as a condition that the paper machine, which manufactures bleached kraft and sack paper, had to be sold.

The EU approved the transaction in mid June 2013, and SwedPaper had a month and a half to get a new maintenance system operational as well as formally assume ownership and operation of the PM2 machine with its approximately 60 employees.

"PM2 is a machine known for making good paper, and it has a well-functioning organization. This is why we wanted to take over," explains Lars-Åke Brännström, who is the CEO and one of SwedPaper's four owners, all of whom have extensive entrepreneurship experience, especially in the paper industry.

SwedPaper AB selected the Infor EAM (Enterprise Asset Management) maintenance system from Prevas; it was installed and deployed under a great deal of time pressure last summer. As the new owner of the business, it was crucial for SwedPaper to include the affected personnel when selecting the new maintenance system.

"Prevas helped out in this respect by demonstrating the system and allowing affected personnel to do test runs. The response was very positive with full support. The users liked EAM immediately – it is easy to use, flexible and can be quickly and easily adapted based on the needs of the organization," continues Lars-Åke Brännström.

Prevas delivered, installed and deployed the system – entirely according to schedule.

"Everyone involved did what it takes to make this happen in an exemplary manner. This applies both to the Prevas consultants who installed and deployed the system and to the IT staff at BillerudKorsnäs who helped ensure the transition from the old system to the new one functioned problem-free. It was a safe and secure process where everyone involved was on site or available the entire time – something which further boosted our confidence in Prevas," emphasizes Lars-Åke Brännström, who is very satisfied with the entire process.