The well-known user interface from Android apps of the mobile world is increasingly used in industrial contexts.

The days when industrial devices were controlled via control panels with lamps and physical buttons are fast disappearing. Today, many systems are so complex that it is no longer practical to control them from physical control panels. At the same time, the static solutions of the past are not geared to the growing demands of innovation speed that is also predominant in today’s industrial environment. Therefore, there is a growing trend toward flexible user interfaces based on touchscreens and software-based operating menus that compactly yet simply present the operator with status information and selection options and which are easily updated with new functions via software. Here, Android is an obvious solution, as it provides both the desired flexibility while, graphically, it appears just as integrated as we know it from the world of mobile applications.

“In industry, they are no longer settling for the heavy static control solutions of the past, but are now increasingly asking for control solutions with the same flexibility and finesse we are familiar with from our mobile phones,” says Søren W. Mathiasen Vice President Sales & Marketing at Prevas A/S. 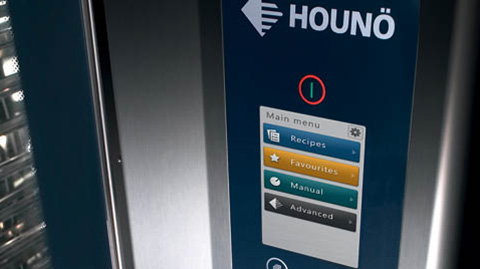 A good example is the controls for the industrial oven that Prevas designed and now regularly maintains for the company Hounö. A modern industrial oven must be capable of much more than simply heating food. It has to be able to run preprogrammed “recipes”, allow updates with new recipes, clean itself, etc., in addition to safety requirements for logging of all events on the oven, so proper food handling can be documented later.

“The oven’s complexity and need for regular updates alone made the choice of a software-based graphical user interface obvious,” says Mathiasen. “But because the oven is also used by inexperienced operators, such as for gas station bake-offs, it was important to develop a solution that was as easy to operate as, e.g., a mobile phone. Here, Android was the natural design choice, as it both allows a graphic look and feel that corresponds to the operator’s experience from the world of mobile phones and is a quick way to create a particularly integrated user interface, as many of the components, such as spin buttons, are freely available.”

The trend towards using Android in industry is just now taking off, perhaps because of ordinary caution combined with a general fear of using open-source solutions in production-critical environments. But that fear is ungrounded, Mathiasen believes: “Open-source solutions are at least as safe as a specifically designed dedicated solution. Typically, the open-source solution is far better tested by its many other users in different contexts.