Sandvik Mining in Västberga is expanding capacity and streamlining many of its processes. Prevas has delivered and commissioned a new production line with robots as well as a complete automation system that has been integrated with machinery and a new high bay warehouse.

“IN VÄSTBERGA we've worked with cemented carbide since the 1950s and there is considerable knowledge of how the material should be handled,” says Daniel Lindqvist, technical manager at Sandvik Mining in Västberga. “The investment has been made possible thanks to gains in efficiency, but at the same time we have the capability to improve the working environment for operators and reduce our impact on the external environment.”

Sandvik manufactures cemented carbine rotary cutters for the mining industry. With the new automated facility, Sandvik Mining is upgrading the final steps of the process.

ROBOT SERVICE AND SELF-DRIVING FORKLIFTS
Prevas has designed, installed and commissioned a new automated flow, complete with machines, robots and control systems. The project began in January 2014 and delivery was underway throughout the year. The new production line includes several concepts developed in collaboration between Sandvik and Prevas during the course of the project. In the original layout for example, each of three machines were served by a separate lift.

“By adjusting the location of the machines, the three lifts could be replaced by a single robot,” says Lars-Erik Forsberg, sales manager for system solutions at Prevas and responsible for the delivery to Sandvik Mining. “To create a better working environment for the operators, primarily with regard to noise, the machines and robot were placed in a separate room in the facility.”

Another solution that has turned out well is material transports with AGVs, Automated Guided Vehicles. From the beginning, the idea was for the material to be transported in the facility on transport conveyors, but with self-driving forklifts a more open and pleasanter layout could be attained.

“Self-driving forklifts provide a flexible solution that can be adapted to our future needs and prioritizations,” says Daniel Lindqvist. “Moreover, we found that conveyors would actually cost significantly more.”

The initiative for self-driving forklifts came from tool designer Fredrik Tallbom at Sandvik Mining. Prevas could provide an interface that made the solution possible, both mechanically and for communications.

“We designed the technical solutions, such as the forklifts being able to safely pick up and drop off materials at the various stations,” says Lars-Erik Forsberg. “Thanks to our open collaboration, with regular meetings and discussions, we achieved very good results.”

SIMPLE, ROBUST SOLUTIONS
A number of experts from Prevas participated in the project – project managers, mechanical engineers, electrical engineers, installation technicians as well as robot, cell computer and PLC programmers. Much of the work was also carried out at Prevas’ shop in Västerås.

“To facilitate installation and speed commissioning, we utilized a good portion of our shop resources in testing communications and functions before we delivered to Västberga,” says Lars-Erik Forsber.

The project has required many special adaptations and methods of problem solving, but at the same time, Daniel Lindqvist emphasizes that Sandvik Mining has constantly strived for implementing solutions that are as simple and robust as possible. “Together with Prevas we carefully simulated the flows and then built up the production line with a straightforward approach and low complexity,” Daniel Lindqvist explains. “Our production is fairly simple, with conventional robots that lift materials in and out, so there was no reason to make things complicated.”

Despite there still being work to be done with fine tuning the flow and increasing the flexibility of the facility, Daniel Lindqvist is very optimistic about the future.

“Installation and commissioning have gone smoothly and we're also very satisfied with the assistance and support we've received from Prevas now that we've begun testing the facility. We're happy to be able to invest here in Västberga and we're looking forward to continued development of our production and operations,” says Daniel Lindqvist in closing 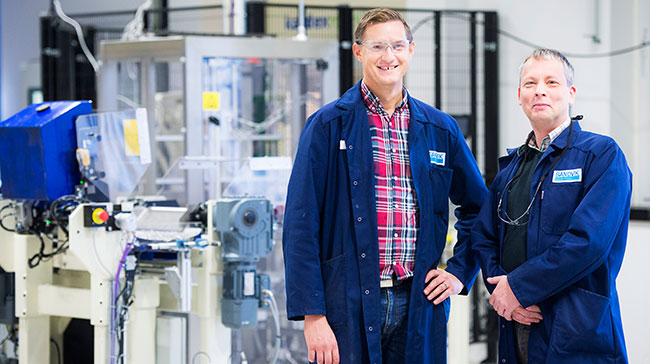 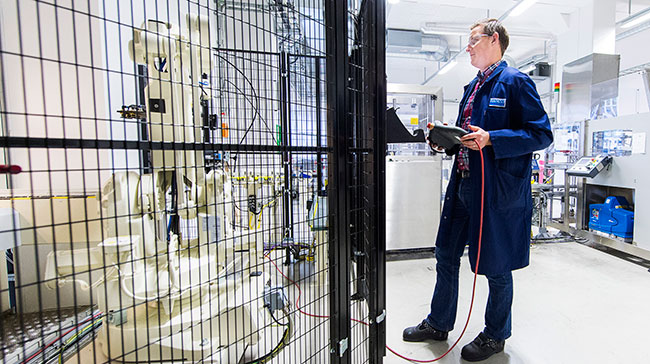 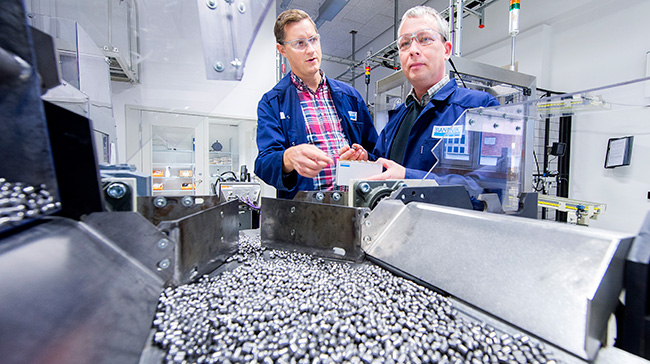