Our engagement is based on our core values and a genuine sense of warmth that we can help children living under extreme conditions, at the same time as we are well aware that many people are being forced to leave their homelands because of climate-related disasters.

Prevas is thus making a donation to UNICEF this Christmas. UNICEF works for children's rights in all fundamental areas, such as the right to go to school and psychological and material needs of refugee children.

Prevas is also making a larger donation to the Musikhjälpen initiative “no one should need to flee climate” governed by the Swedish public service broadcasting network's aid foundation, Radiohjälpen. There are presently millions of refugees around the world. And it's not just due to war and other armed conflicts. During the past five years, more than 100 million people have been forced to flee because of climate-related disasters. But we can make a difference. By working preventively, the consequences of these disasters can be mitigated and people's lives saved.

Merry Christmas and Happy New Year
From your friends at Prevas 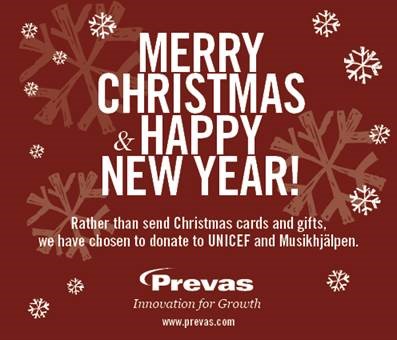