Bloody Seriousness in Cooperation with HemCue

Blood and urine analyses performed as part of primary care have become simpler thanks to HemoCue’s various analysis products. Healthcare can be streamlined if samples from individuals suffering from anemia, glucose disorders or microalbuminuria do not have to be sent to a central laboratory for evaluation. Prevas’ test system has helped HemoCue create more efficient and safer products.

One example of a HemoCue product is a system for determining white blood cell concentration – HemoCue® WBC.

HemoCue® WBC is a unique system for determining the total number of white blood cells. The system is based on HemoCue's well-known and reliable cuvette technology. Test results with laboratory quality are obtained within minutes. The system requires a mere 10 µL blood from a finger prick. The cuvette is pre-treated with a reagent that hemolyzes the red blood cells and turns the white blood cells blue. The cuvette is placed in the instrument, which contains both a microscope and a camera. A picture is taken, and the instrument counts the number of white blood cells using image analysis technology; the results are shown on the display within three minutes.

Sara Nilsson, who works as a consultant at Prevas, describes how the work has been done.

“This concerns advanced products that are used when treating human beings. Therefore, it is of utmost importance that the function is reliable, which requires a reliable production process. Since this is a complicated instrument, it is necessary to create a testing procedure that can verify all parameters in a standardized way. The procedure must be able to deliver simple error messages and provide instructions for all operations. That’s where Prevas comes into the picture,” she says.

Prevas' part of the project has resulted in several test stations where instruments are tested before and after assembly.

Testing begins by HemoCue's firmware being downloaded to the instrument. Function testing is then performed to ensure the function of each instrument.

Most of the tests are run from a test computer, and the software instructs the testing personnel on how to connect the instrument and how to proceed during the course of testing. The aim is to avoid the necessity of extensive training since the testing methodology is to be established and controlled once and for all according to the agreed specifications. The result of each step appears as a simple PASS or FAIL on the monitoring computer's screen. The results of the tests are saved on the instrument and on the test computer when necessary.

Right expertise and level of efficiency

For Prevas, the entire project has taken about 3.5 months to complete. During that time, the actual software for testing was developed, along with the methods that would be used, specifications for requirements, design and testing as well as instruction documentation.

“Prevas had the right expertise at the right price, which is why we chose them," says HemoCue's Head of Development, Kenth Svanberg, when discussing procurement of the service. "We had a job that needed to be completed in a relatively short amount of time, and didn't have the resources to do it ourselves."

"The three consultants who worked with us on this project have taken a great deal of responsibility and own initiative in order for the work to progress. Employees at Prevas have a high level of expertise. We were able to select the consultants' profiles ourselves, and thus chose consultants with previous experience from similar projects. We are happy with their work, and even if the project isn't quite finished, it looks very promising," concludes Kenth Svanberg. 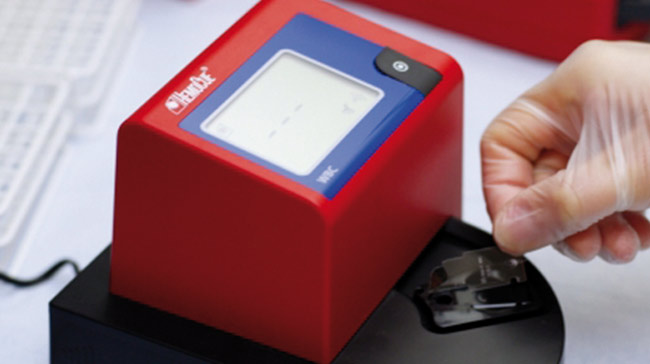