So ingenious – and yet so obvious! With a very short ramp-up time, SWAPSAFE (former Inexso) has utilized IoT solutions to develop a security classified box that enables self-service exchange of keys around the clock.

Any vacationer who has ever rented a cabin, apartment or car is aware of the problem with keys. Where do you pick them up? When do you have to arrive? How long will you have to wait in line? Each year, an estimated 50 million key exchanges are made, which until now has required an intermediary.

SWAPSAFE, with Prevas as its development partner, has now solved the problem of exchanging physical keys in a secure and innovative manner. Prevas has developed the electronics and SWAPSAFE has developed the applications. Since 2016, the entire Danish insurance industry has implemented new rules for EU certification, which has placed new demands on IoT products. Prevas has considerable experience from this and has served in an advisory capacity in certification.

The key box is primarily intended for the rental branch, with Airbnb, cabin owners, vacation villages and car rental agencies. The synergies with other business activities entail enormous potential. The box can be installed outdoors on building facades and opened with a code received via SMS text messaging. Electronic monitoring documents when and by whom a key has been picked up.

Kasper Hessellund Hansen, SWAPSAFE CEO, has to be considered an entrepreneur beyond the norm with his 18 years of experience from start-ups.

“The team and I have a background in software, which has enabled us to do a lot ourselves,” says Hansen. “We have an ambitious vision. The box is presently used for keys, but it’s actually only a bearer of a software application. With the departure point in the electronics platform and the software that starts the system, the box can in principle be used for many other commercial integration solutions in which the physical exchange of a product is necessary to conduct a business transaction.

“As an alternative to setting up a team ourselves, we decided from the start to collaborate with a development partner skilled in product development and IoT solutions. The choice fell to Prevas. We are partially financed with public funds for projects with an element of risk when it comes to business development. With their experience and knowledge of the technical certifications that would be necessary for further development of the product, we felt secure with Prevas. Working alone, we wouldn't have managed such a short time-to-market. Even if the process is long, it’s gone quickly – one year from production to prototype. A major advantage with engaging a development partner is that we’ve been able to benefit from Prevas’ entire Nordic network of expertise. This is what has enabled us to achieve our goals within the given frameworks.”

Martin Bang Andersen is a project manager at Prevas.
“We have a methodology in which all approaches to problems have already been surveyed, which allows customers to quickly bypass many pitfalls,” says Andersen. “We are knowledgeable of all parts of the operating system and the challenges we may encounter. Besides an extensive network of experts, we also have a freelance network that gives us access to a multitude of additional resources with expert skills in all fields.”

The master box consists of 12 drawers and measures 80 x 30 x 14 cm. An additional 16 boxes with 19 drawers each can be connected to the master box for a total of 316 rooms. To date, the box has been coded for English, German, Spanish, Danish and Icelandic. And it’s easy to add additional languages.

The box complies with demands for color selection and regulations for the locations where it is installed, which at present, is adapted for private and public locations.

Prevas has developed an i.MX6-based CPU board utilizing the ESIP concept, which supports various wireless technologies such as WiFi and 3G for connection to the Internet. Prevas has also developed the electronics for the locking mechanisms and the LVDS converter card for the display on the front of the product. It’s a custom solution based on Linux BSP, Prevas Industrial Linux (PIL). 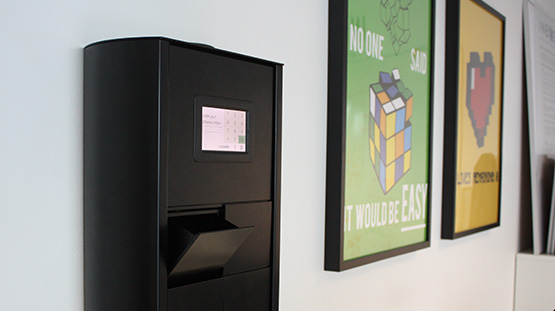 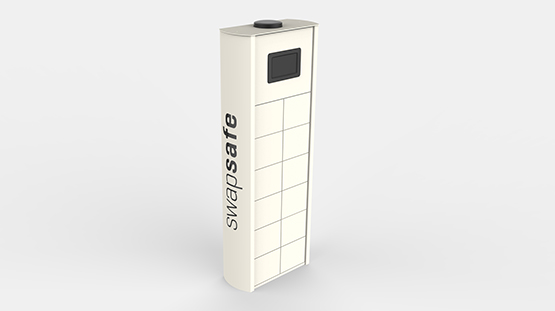