Modern production technologies provide true challenges for production testing. Thin Film asked Prevas to help them in developing a measurement system to test up to 1000 EAS capacitors per second. Traditional test methods are not able to handle this kind of volumes, so a new approach was necessary.

The Product
EAS capacitors are widely being adopted in fashion industry. For their tiny size, they can be used as alarms that are inserted inside a shoe or cloth already when manufacturing. This is a high-volume and low-cost product, so the production volumes must be high and cost low.

New Approach in Testing
Traditionally products like EAS capacitors are tested by forcing a few different currents through the electrical component to characterize the manufactured product. This approach had to change as it simply takes too much time. The new solution was developed in co-operation between Prevas, Thin Film and Northfield Automation. It is based on fast testing with forced voltages and current measurement with several devices being tested in parallel.

Novelty Solution
Prevas built an electrical tester with National Instruments PXI power supplies to allow fast cycling of Sourced voltage. In front, PXI switches were used to bring more speed in the testing, allowing the probes stay still for a longer time. The system has 16 power supply channels used in parallel and all together 1280 inputs to switch. This allows a throughput of 1000 devices per second.

Northfield Automation created the probing machine that provides connections between the devices and the electrical measurement system.

High-Performing Software
Prevas designed and implemented a high-performance SW architecture to allow parallel tests to be running with constant high speed. A high degree of flexibility was needed, as the product development of the customer was going on at the same time as the development of the production test solution. The flexibility was enabled by a plug-in architecture that separates the application and different modules, such as the power supply, from each other.

Main application runs on a PXI embedded controller and a specific software for handling the results runs on a separate database machine. Both applications communicate with Northfield’s probing machine using a jointly developed protocol.

Satisfied Customer
Prevas was able to develop the software solution on time and in good co-operation with both Thin Film and Northfield Automation. Work started with a pre-project to verify the feasibility of the chosen approach and continued all the way through development cycle to the finalization of the test system. The developed system fulfills all the initial requirements and was adapted to new emerging requirements along the way. 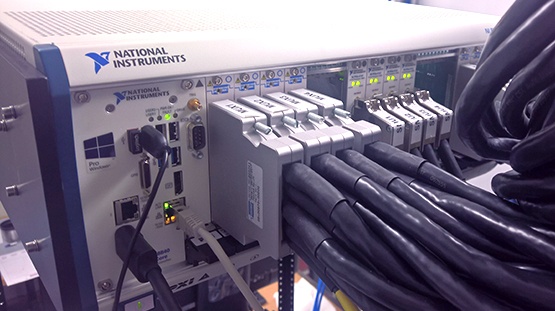